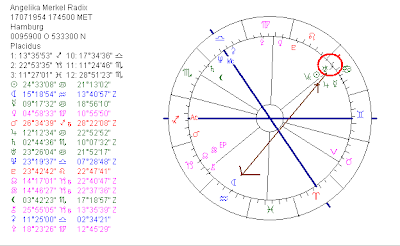 Angelika Merkel was honoured today, in public with progressed Moon conjunct Venus (dispositor of the MC), so I guess she was pleased. In the description of her chart in Dutch I said, that it is not a miracle that she became a prime minister, when you look at her natal chart ( 17th July 1954 at 17h45 in Hamburg).

ASTRO I.D.
She has a calling Moon in Aquarius, square Zero Aries
Uranus rises before the Sun
Moon and Uranus are in mutual reception and they are end dispositors of the Midheaven. The need to change the world is leading in her carreer.

FINE CARREER
There are so many midpoint combinations that illustrate her ambition and carreer, that I simply point at the list in my article in Dutch. I like to point at combinations for succes made by aspects:
1. Mercury conjunct Jupiter and semi square Pluto
2. Mars in a quindecile (165 d)with Jupiter, trine Pluto

In January 1991 she became a minister (Progressed MC trine Sun, progressed Sun in the final degree of Leo - changing sign - and trine progressed Mars - in the final degree of Sagittarius). When she became a prime minister: transit Pluto inconjunct Uranus and trine Pluto (for a radical change). In October 2007 Merkel showed courage by receiving the Dalai Lama. Her Jupiter is tirne his and conjunct his Sun (if he is born 6th July 1935).

HARD ASPECTS
There are hard relations between Sun, Uranus, Neptune and Pluto. These kind of aspects make you wonder about her fysical condition, but there is no sign of any need to worry about that. Nevertheless, I thougth that Sun square Neptune HAD to mean a thing. And so would the conflict with Mars and with Uranus. And I found out what it meant.

Angelika Merkel divorced (Sun in conflict with Mars and Uranus). She had a father who worked as a vicar but had very nice relations with the communist regime (Sun square Neptune). And the press was not very kind in the beginning. In fact, they published very ugly pictures of her. Recently however they were enthousiastic (...) about her low cut dress showing her 'decoletté'. Transit Neptune is inconjunct her Sun and the aspect is getting more and more tight. So I think more unbalanced (inconjunct) attention (Sun) from the press (Neptune) is to be expected.
Geplaatst door Astromarkt op 9:55 PM