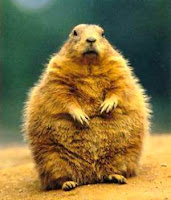 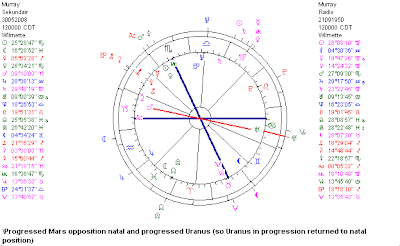 Bill Murray (Main character in one of my favourite movies: 'Groundhogday') was born September 21, 1950 in Wilmette, ILL, USA. His second wife wants a divorce. Reason: abuse, his wife says and his addiction to alcohol and drugs.

PROGRESSED MARS-URANUS
A pity, no birth time available...but I can see that progressed Mars is opposition natal and progressed Uranus this year. Mars-Uranus conflicts are one of the 4 indications in a males chart for a divorce (the others are Moon-Saturn, Moon-Neptune and Venus-Neptune). You see his progressed positions and the birth positions on the outside of the circle. Notice that his Uranus was retrograding in progress and returned to the birth position in 1999 (P Uranus conjunct Uranus). In 1999 he wrote his autobiography. Uranus is important in his chart (no major aspects in sign and in orb 5 degrees, biquinile Mercury).

ADDICTION: CALLING MOON
For the addiction I like to point at the calling Moon. The Moon does not make Ptolemic aspects in sign or orb. Moon is the symbol of needs and habits. Without major aspects the needs may reach any level.