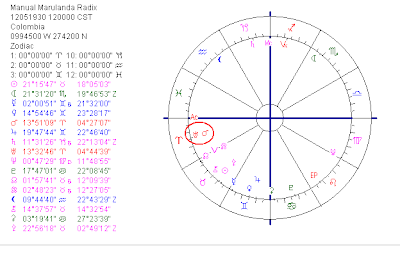 Manual Marulanda, founder of the Colombian movement FARC, died. He was born May 12, 1930 with Mars conjunct Uranus oriental for an orientation on quick changes. In the article about Mars and Uranus on my site Astromarkt, you can read about the effect of Mars-Uranus in the charts of rebels, freedom fighters, short tempers and terrorists. Manulanda died of cancer.
Geplaatst door Astromarkt op 11:31 AM