BIRTH CHARTH OF GORDON BROWN
A Sun and Saturn conflict... 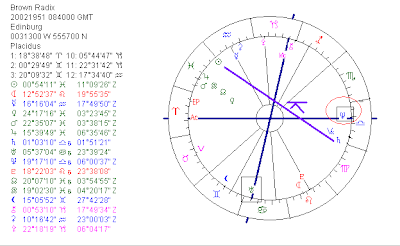 "His Sun is inconjunct Saturn in his chart and I wonder if that is a good position for a man in charge. His ambitions might not catch up with his health or he cannot combine leadership with administrations and control. His is first of all a man with ideals (Neptune is oriental) and his calling Jupiter will make him want to travel, publish and 'be international'. Mars is now opposing to Saturn and at the same time semi sextile the Sun in his chart and sesqui square to Pluto soon. It seems there is a hard struggle going on or a lot of work to do. At the same time Jupiter is making a trine with Progressed Pluto and square to Progressed Nodes. Pluto on the other hand is squaring his Progressed Jupiter. It is easy to see the succesful combination of Jupiter, Pluto and Nodes (the party). Gordon Brown was born in Edinburgh on 20th February 1951".

Now I know that he was born at 8:40 a.m. in Giffnock.
And now there are serious doubts about his abilities and transit Saturn is opposition the natal Sun (activating the inconjunction of Sun and Saturn in his birth chart). Also the progressed Midheaven (changed sign seven months ago) is about to make contact with the Sun inconjunct Saturn (end of August till in October).
His progressed Sunsign will change in about two years time and again there will be (progressed) Sun inconjunct Saturn a year later.