GASCOIGNE'S UPS AND DOWNS
The birth chart of Paul Gascoigne, Jupiter and Saturn 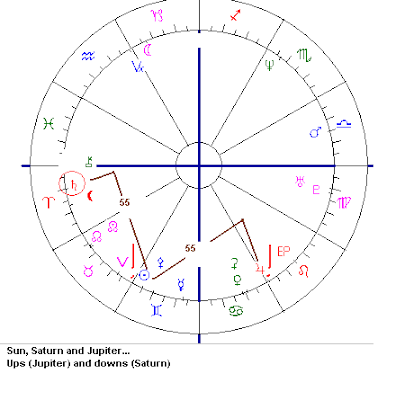 Paul Gascoigne is a world famous ex football (soccer)player who probably suffers from mental disbalance and this week did an attempt to end his life. On the day of his birth (27th May 1967 in Gateshead) Sun and Jupiter were calling (for being an international star). But Saturn is calling, too, and Saturn was oriental (for the serious orientation at any possible level).

PROMINENT UPS AND DOWNS
The disbalance is between the rather depressed Saturn and the optimistic Jupiter and the fact that both are exactly 55degrees and some minutes away from the Sun that day (sort of mirroring each other, like in a Yod). A prominent Jupiter for prominent ups, a prominent Saturn for prominent downs...I wonder why doctors cannot control this?

Also the tightest aspect in his chart is Mercury inconjunct Neptune...It is an aspect for mis-communicating and for 'losing your mind'. Alcohol and drugs (Neptune) in his case did the rest, they weaken the mental situation and add more disbalance (inconjunct).
Also look at Sun quindecile (105 d) Uranus for living a tumultuous life.

i wonder if there is anything in his chart that's shows not only is he drunkard ,mentally unstable public manipulator but he is also a sex addicted rapist and wife beater look at this recent article from his abused ex wife.
Link:
http://www.newsoftheworld.co.uk/news/543103/Read-Sheryl-Gascoignes-most-shocking-interview.html

The chart above is a 'time unknown' chart and shows only part of the picture, I am afraid. It takes an hour of birth to see more. Social circumstances contribute to it all. In this post above I pointed at possible disbalance (Jupiter-Saturn) and addiction (Neptune). Aries Point (Zero Aries) is opposition the midpoint of using and abusing force and energy (Mars/Pluto) and that might contribute to the picture that the public has of him, especially now that transit Pluto squares Aries Point.