Than Shwe is the leader of the Myanmar junta. He was born in Mandalay, February 2, 1933. It was not a special day with special placements. Maybe he was born at a crucial moment, but we don't know. So in this case the combination of time and place must have been perfect to produce a person who is unwilling to help his own people because he is anxious to keep Myanmar (Burma) a secret, hidden and isolated place without influences from abroad. I found the components of his behaviour in the positions of the day of his birth.

50% of his placements are in earth signs for a materialist and realist. He has a strong will (Sun Aquarius, Moon Taurus) and the strongest (most tight) aspects are:

1. Mercury conjunct Saturn and inconjunct Neptune
When he was young he had a traumatic experience in wartime. He has been treated in a psychological hospital (around 1950, when his progressed Sun was moving to another sign). Saturn-Neptune is the combination for illnesses and Mercury is symbolic for the mind (= mental illnesses). Also Saturn is the symbol of borders, limitations and fear. With Mercury (communication, contact) and Neptune (illusion, fantasy, immaterial) the combination Mercury-Saturn-Neptune might lead to unrealistic (Neptune) fear (Saturn) for contact and communications (Mercury). Particulary since the inconjunction is the aspect that is connected to disbalance and illnesses.

2. Venus trine Jupiter (and sextile Pluto)
He may not be very popular world wide, but in his group he apparently managed to get support (or else he would never have been a leader). Venus with Jupiter and Pluto points at being loved by many and at being wealthy. Although the people are poor, mr. Shwe (who they call 'king' sometimes) had a splendid reception for his daughters' wedding.

3. Mars inconjunct Uranus
This very tight aspect is a disturbing one. Mars - Uranus indicates an explosive nature and special energy. The inconjunction adds disbalance and discrepancy. Rebellions, 'freedom fighters' and terrorist seem to need this aspect, because most of them have it: the drive to make an immediate change. In this case the freedom and independancy that he fought for, has been attacked by himself. It does not really fit. More about Mars-Uranus...

4. Jupiter sextile Pluto
Many of his contemporaries were born with this lucky and promissing aspect. Not many will have this connected to a personal planet (in the case of Than Shwe with both Venus and Mars for passion).

There are some minor and wider aspects about his chart (and him) that could be of importance:
- Sun biquintile Mars (and conjunct Saturn, almost out of orbs) for being a creative fighter.
- Jupiter sesquisquare Saturn for a longlasting carreer (a question of hierarchy, he was the next person in charge when a general stepped back in 1992)
- Jupiter quindecile Nodes (for the obsessive support and protection of his group and the advantages of it)
- Saturn quintile Uranus (being creative with the protocol or the limitations of freedom....i.c. creating his own prison)

2007
On the 4th of January 2007 he did not show up to celebrate independance day as he was ill. That was with transit Pluto semi square his Sun (a frustrating fysical problem).

2008
Right now his Sunsign is on it's way to another change, due in 2 years time. It will change his life. Progressed Venus will be conjunct his Sun within a year. The biquintiles in his progressed chart (Sun and Venus biquintile Jupiter) point at a creative way to have a good time. But how about the disaster in his country? It might have stopped the protests against his government for a while. On the 3rd of May mr. Than Shwe had transit Jupiter and transit Ceres tightly trine his natal Jupiter: a fortunate combination. Other observations for that day: Transit Pluto was trine progressed Mars and semi square progresses Saturn for the theme of violent death. Transit Saturn conjunct Mars, for death. And transit Uranus trine Pluto for an easy complete change (an easy way out?).
I don't want be cynical, but in fact this disastrer helped him to keep his position of power and punish the rebellious people.

BAN KI-MOON (born Ban Ki-moon 13061944 062600 JST Seoul)
Today mr. Ban Ki-Moon will try to convince mr. Shwe to accept foreign aid. In his chart Uranus is square Sun and sesquisquare Pluto to indicate the attempt to make a change. Transit Jupiter and Uranus are both inconjunct the natal Jupiter of Ban Ki-Moon. That expresses un unbalanced and disproportional optimism and relief. Also notice Saturn square Mercury for bad communications. And how about Mars semi square Sun and conjunct Pluto for using force and pressure. So many people have already died and suffered in vain...
It is nog an easy job for the chief of the UN, who was born June 13, 1944 at 6:26 a.m. JST in Seoul with Jupiter biquintile Uranus for a creative look at the future.

THE JOB
The interaction between Ban Ki-Moon and Than Shwe is visualised in the chart below. 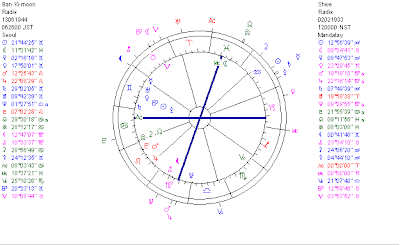 You see the birth chart of Ban Ki-Moon and the positions of Than Shwe on the outside.

The progressed Mars of Ban Ki-Moon is in between Mars and Jupiter of Shwe. Uranus of Shwee is square the progressed Moon of Ban Ki-Moon. All of this does not promise an easy conversation, I am afraid. But the fact that Ban Ki-Moon has been allowed into Myanmar is the first good sign in days. Than Shwe says he needs 7 billion dollar. Ban Ki-Moon wants him to open up the borders in return. Soon we will know the results. With the oriental Jupiter of Shwe it would not be surprising if he left the country. If he does, it will not be without the money.

AUNG SAN SUU KYI (born 19061945 120000 NST Rangoon)
For those interested I added the birth positons of Aung San Suu Kyi, leader of the Burmese opposition who has not been allowed to leave her house since she won the elections. She has an oriental Uranus (for an orientation on changing the world) and her Sun conjunct Saturn/Uranus for the theme of limited freedom... 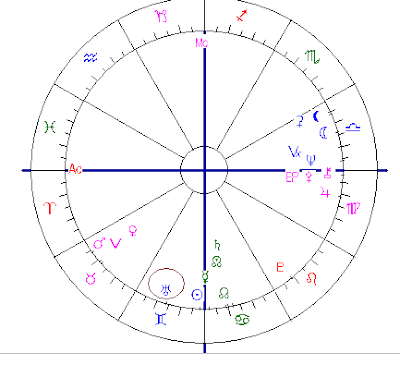