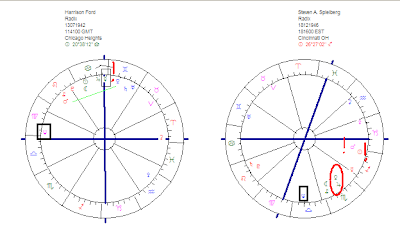 Steven A. Spielberg is a director and his business is movies (like Indiana Jones number 4:). How can we see that in his chart? Well, it is pretty obvious (once you know it...)
These are the indications:

- MC in Pisces (the immaterial, religious or idealistic field) (square Uranus for being controversial sometimes)
- Neptune on a crucial spot (the lowest spot in the chart) (fantasy and immagination is crucial)
- Sun without major aspects in sign (within 5d of orb) is calling! (a star, a leader, someone in charge)
- Jupiter is the oriental planet (conjunct Venus) (an international, publications together with estetics)
- Moon (ruler 1!), Venus and Jupiter (prominent planets) in the 5th house of (pro-)creations and show
- Mars square Aries Point and 'calling' for the enterpreneur

Harrison Ford is the actor who impersonates Indiana Jones, the adventurer. Harrison Ford was born July 13, 1942, 11h41 a.m. CWT in Chicago Heights with Mercury (communicating, speach,writing) calling! and square Zero Aries AND conjunct MC, the Moon (keeping the memories alive or ... imitation, reflection) ruler MC (history, pretending, feeding, educating) and strong in Cancer, Venus sextile Mars tightest aspect (passion). Mercury is very prominent , so that he could not miss the theme of the 'messenger' or 'interpreter'. And why movies? I think the sextile aspect should have an even smaller orb than I use to use (5d), maybe 3,5 for the max. In which case Neptune would be calling in this chart. On the other hand, the placement close to the Ascendant is an important indication as well. Notice that Mars is conjunct the midpoint Ascendant/MC and Jupiter/Neptune (semi square MC). Jupiter/Neptune, again, is pointing at fans and followers, succesful 'fake' or 'make belief' etc. and very fortunate for an actor.
Geplaatst door Astromarkt op 8:25 PM