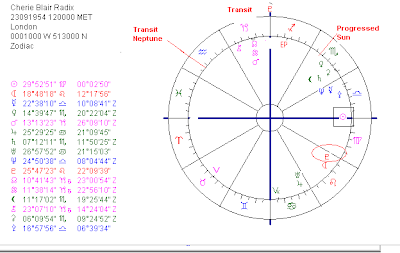 Cherie Blair has written an autobiography and from day to day the Dailymail.co.uk reveals some of the contents. Today it was that she forgot the pill and got her son Leo (conceived at Balmoral), and that Tony Blair insisted on letting the press know that his wife got a miscarriage in order to avoid speculations about the reason of the delay of their holidays.

Cherie Blair was born 23th September 1954 with Pluto rising before the Sun for strategy and for sex, money and influence or politics...first. Her Sun is opposition Zero Aries and the Moon is in Leo. That is the reason why she wants attention for her position in life. If she is born after 13h30 the Sun is not aspected by major aspects in sign and that points at drawing attention by being a star or a leader at any possible level.

Recently her position changed and she had to move out of Downing Street 10. Transit Pluto is square her Sun and transit Neptune is square her progressed Sun. She might have difficulties with the change. Also notice that the press (Neptune) is not always kind to her. And not only the press...Her revelations about the relationship of mr. Brown with Mr. Blair has not been welcomed by Labour MP's who support Prime Minister Brown at all!

Cherie and Tony Blair have been married for a long time. Her Jupiter is conjunct his IC and square his Mercury. And her Venus opposition his Sun. Probably her Moon is square his Sun or opposition his Moon, but without HOB we don't know for sure...Also his Saturn is conjunct her Mercury. Does that mean that her book embarrasses him?
Recently transit Uranus was conjunct his progressed MC for a possible shock effect. I wonder if he knew:)

The gossip (Neptune...) is that Cherrie published parts of her biography sooner to gain more money than she would have if she waited till October. Because in October they expect Gordon Brown to have been forced to step down. And that is strategy again, and money (and is not that very Pluto?...).
Geplaatst door Astromarkt op 7:05 PM