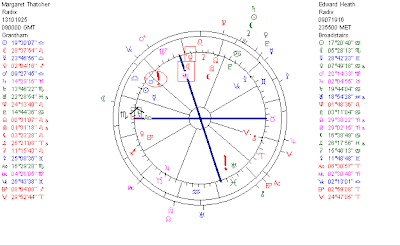 Margaret Thatcher - The Long Walk To Finchley, to be shown on BBC4 is a story about the carreer of Margareth Thatcher and ... her attempt to seduce Edward Heath (in vain) as a sort of an explanation for the icy relationship that they seem to have had. BTW: Heath never married and rumours say that he was gay.

I bet that the Iron Lady is not amused. Her later years are very uncomfortable. Just remember the affair with her son Mark, for example (see below). She had transit Uranus inconjunct her natal Sun last March (when there was an order for his arrest), Saturn conjunct Midheaven and semi square Sun, transit Pluto semi square Ascendant (still active). Rightnow,transit Neptune is tighly opposition Neptune and the media (Neptune) presents a questionable secret (Neptune) that is not in her favour. As it happens, Neptune is also the symbol of romance and affairs.
For the upheavel and scandal in the news we see transit Uranus opposition progressed Uranus (perfecting tomorrow). Also, the sign on her progressed Midheaven is about to change.

Couuld all of this could have been 'predicted'? In her birth chart Neptune is the top planet and ruler of the IC (past and life end). But let us have a look at her birth chart.

We see Saturn near the Ascendant and sesquisquare Aries Point, Neptune on top, Moon conjunct the MC (in another sign), Mars oriental and without major aspects in sign, just like Uranus. Mars and Uranus are 'calling', Moon, Saturn and Neptune are crucial. She has five prominent planets all together of which Mars and Saturn are the most important. It is funny that Mars and Saturn fitt the nick name of 'Iron Lady'. She is first of all assertive and it is crucial that she is serious, ambitious and a manager. Saturn is the symbol of administrations and governments, too. And Mars is also the symbol of sports and/or war.

The closets aspect in her birth chart is Jupiter opposition Pluto (for the main question: does money and fame make you happy?). Well, if Margaret Thatcher makes it till February 2009 she will feel happy. At that moment the progressed Moon is trine Jupiter and sextile Pluto. 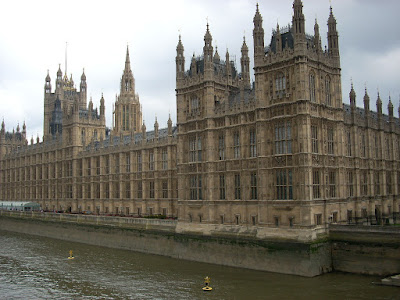 EDWARD HEATH
Edward Heath was born 9th July 1916 in Broadstaris at 23h55 MET with Pluto conjunct the IC and oriental: the planet of politics, influence, money and strategy on a crucial place pointing at being orientated on power.

Moon square Neptune and quindecile (105d) Saturn aren't fortunate aspects for a male, when it comes to relationships with the other gender. In his chart the afflicted Neptune is in the fifth house (the house of the other gender). But there are more reasons why Edward Heath and Margareth Thatcher did not match but could get involved in a tale about a romance.

Her Sun is square his (Libra - Cancer)
Her Moonsign is square his (Leo - Scorpio), but there is no aspect
His Saturn is square her Sun
His Venus is square her Mars (hey?! maybe some attraction...:)
His Mars is opposition her Uranus in the 5th (rather intruiging synergy, as Mars-Uranus is one of the aspects in a man's chart that doesnot make it easy to get or stay married with a woman*). This aspect might point at the importance of sexual diversity in their relationship.

Above you see her chart with his position on the outside of the frame.

MARK THATCHER
The Daily Mail reported early March 2008 that Mark Thatcher had been named related to a complot theory for a coup to bring the Guinea government down, together with his friend Simon Mann. It is a long storyg but very short in 'astrological'. Transit Neptune oppositon his natal Sun highligthed secrets and made him a suspect. In his birth chart (15 August 1953, time unknown) Saturn is square Uranus (for the item of limited freedom...) and the Sun close to Pluto with Mars oriental (like his mum); a compostion for the use or abuse of power. Margareth's Uranus in the fifth house of children is inconjunct Mark's Sun. And that shows the upheavel that Mark will bring in her life, and that there is not much that she can do about it (inconjunct).

RELEVANT:
Sharing aspects with a partner
Mars and Uranus