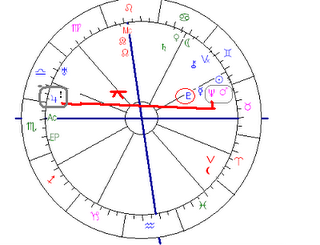 In november 2007 I published an article about the birth chart of father Pio, entitled: Holy or Fake? This is what I wrote:

"Dutch newspaper Trouw reported on the 8th of November that Saint Padre Pio (born May 25 1887 at 16h10 in Pietrecina) cheated his audience. He applied the stigmata himself. Also it has become known that Pope John the 23rd was not conviced that Pio sticked to the celibate status of a roman catholic priest. Let us have a look at the chart of a roman catholic priest who still has many believers and followers who worship him.

JUPITER, NEPTUNE AND PLUTO
The birth chart of Padre Pio shows us a man with a lot of self confidence and a strong ability to convince others. Jupiter is 'calling' (not making major aspects in sign). Pluto is rising before the Sun. The prominence of Jupiter and Pluto, making a creative quintile between them, applies to a succesful man.

Even after death, when your reputation is being discussed, transits and progressions stay alive. Now that there are doubts about Saint Pio because of the statements of drugstore owners at the time who delivered material that could be used to produce stigmata, we see transit Pluto inconjunct the natal Mars-Neptune of Pio. The progressed Sun is beginning to change sign and next year (right after the square from Jupiter) this Sun will receive a square from Pluto. Is not the circle round? Important moments in time are often marked by come-backs of astrological aspects in/with the natal chart. BTW: in Pio's solar return chart for 2007 Saturn sits on the midheaven. "

But what happened later?
On March 3, 2008 the body of Pio (40 years after his death) was exhumed. We see transit Saturn semisquare his natal Saturn 0.0 degree of orb on that day for the disadvantages of age and position, with transit Venus opposition MC (a wish coming true). Three weeks before the exhumation the progressed Sun changed sign. A new period of or about his lifetime and/or fysics then started.

And I like to add this:
Jupiter INCONJUNCT Neptune is astrological for a disbalance or indiscrepancy in religion and/or in the fact that he has fans and followers. And that might be the serious doubts that have risen now and before...
Geplaatst door Astromarkt op 11:04 PM