BIRTH CHART OF CHARLES MANSON
now that they are digging 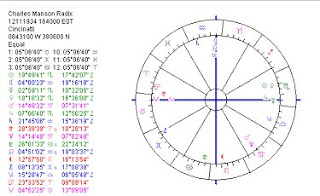 CHARLES MANSON
Now that the police is digging to find more victimes of the Charles Manson group, I thought it was time to translate my reading of the chart of Charles Manson, a man who had many followers (5 midpointcombinations with Jupiter and Neptune!) who did all he wanted and more. He never seems to have killed himself. In jail he devoloped into a writer and a singer. I like to show you the effects of his birth chart (12111934 164000 EST Cincinatti). The most significant observations of this chart are these:
- there is no harmonious aspect at all (a hard life and character),
- Vulcanus on the Ascendant and square Moon (unusual violent aproach).
- Uranus/Neptune with Mars (for the influence of drugs,)
- Sun/Mars/Pluto 3 times (the theme of using and abusing force is strong in his life).

Circumstances and situations directed the man with this chart right into the arms of crime.

ASTRO I.D.
Pluto, Mercury and Jupiter are on a crucial place in his chart. Jupiter also is the oriental planet (international, pubishing, conviction).
The Moon is high above, conjunct Northern Nodes (relationships with females or family on top)
These four prominent positions point at a great vocabulary, and successes. Considering his awfull background and family life (mother alcoholic, father unknown), in a way he made it. He had followers and influence.

But the closest crucial placemant is that of Vulcanus, conjunct Ascendant. And you also see Pallas there.

QUICKSCAN
50% of his placements is in watersigns. Watersigns are easy to be seduced, they go with the flow. But Charles Manson had 40% in Scorpio. You can hardly consider Scorpio weak. It is a fixed sign. Keywords for Scorpio are: to defend, all or nothing, reorganising, reproduction, challenge and problem.

You show your Scorpio sun :
- by making life difficult for yourself
- having high demands on yourself and others
- not avoiding challenges
- showing courage
- wanting to be the strongest (mentally and/or physically)
- be the last man/woman standing
- if you boldly go where no one would go if he/she was not a Scorpio
- to take the lead when things get difficult
- to want to be a winner (you hate loosing)

Charles Manson has Sun, Mercury, Venus and Jupiter in Scorpio. And all(!!!) of his planets are heavily afflicted!. There is no harmonious aspect, it is all struggle, trouble and fighting. But the tightest aspect Notice Sun square Saturn (for ruling on your own and for the disadvantages of your own you). It is an aspect that he shares with Chávez, and Osama Bin Laden. Saturn in Aquarius (ruled by Uranus) adds the theme of limited freedom and resistance against it.

VULCANUS
Maybe you don''t believe in the existence of Vulcanus, but I see Vulcanus every time that there is exceptional public violence. In the chart of Charles Manson Vulcanus is tightly conjunct the Ascendant and square Moon (1d of orb): unusual (Moon afflicted) violence (Vulcanus). It is the first thing that comes to mind when you hear the name - Ascendant - of Charles Manson. His birth chart is not a pleasant birth chart. The radix shows a life full of doubts, crime and fighting. There is no harmony in this chart. But with Mercury and Jupiter on a prominent spot you can learn fast and communicate succesfully. It is a pity that the midpoint is square Vulcanus and Moon again...And Moon square Vulcanus shows the need of violence.

URANUS-NEPTUNE
In the chart of the famous Dutch drugsdealer Klaas Bruinsma, Uranus and Neptune are very important. So it is in the birth chart of Charles Manson. Mars is conjunct Neptune and semisquare Uranus for being explosive under influence. The combination is repeated several times in midpoint combinations.

HOW ABOUT ART?
Intriguing is that the Moon, the Midheaven and the Northern Nodes are in a sabian symbol (Janduz) of...artistic ideas. Here is the link to his music.

I will use some of the interpretations of the midpoint combinations to explain the violent impact.

There is a 3-fold combination of using (Mars) violence and influence or force (Pluto): Sun/Mars/Pluto. It says that there is a very strong energy and drive and that this person is a (sexual) powerfull man.

TODAY
The excavations in a certain area are being done during transit Uranus sesquisquare the natal Jupiter of Charles Manson. This is a 'Thank God' construction for a positive change (but I don't know in what way). Soon transit Saturn will be inconjunct his progressed Sun and semisquare his progressed Mars and that might not be good for his fysical health.