URANUS IN THE BIRTH AND PROGESSED CHART OF JOHN PRESCOTT 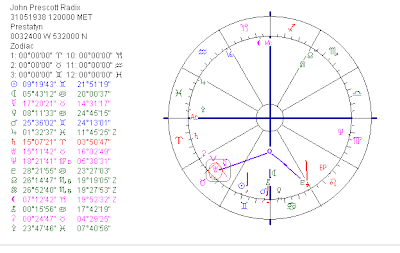 John Prescott (born time unknown on May 31, 1938 in Prestatyn) recently 'confessed' that he had bulimia, an eating disorder, in his memoires.

John Prescott was a controversial deputy prime minister under Blair. And he keeps helping the newspapers to fill the pages...Uranus, of course, is oriental in his chart, conjunct Mercury. Uranus is also prominent because of the semi square with Aries Point. And Uranus is the symbol of controversy and news. It is no coincidence that his progressed Sun in 16/17th degree of Leo is in between a square with natal and progressed Uranus. Uranus is the key to his revelations and autobiography.

Besides, the Sun is also calling in his chart and so is Mars, so is Pluto, too. Sun, Mars, Uranus and Pluto all prominent..., that is the recipe for a rather impulsive and radical leading person. Also Uranus is quintile Pluto (for being creative in making sudden changes).

The Moon is in Cancer, symbol of food, youth, eduction and emotions. The eating disorder might have something to do with the position of the Moon. But bulimia also has to do with sudden impulse. And there is a lot of sudden impulse in his chart.
Geplaatst door Astromarkt op 9:58 PM